Connect and share knowledge within a single location that is structured and easy to search.

What happened to homebrewing?

Of all the sites with 0.0 or 0.1 questions/day, one of them caught my attention since it has about 5900 questions. That site is Homebrewing.SE: 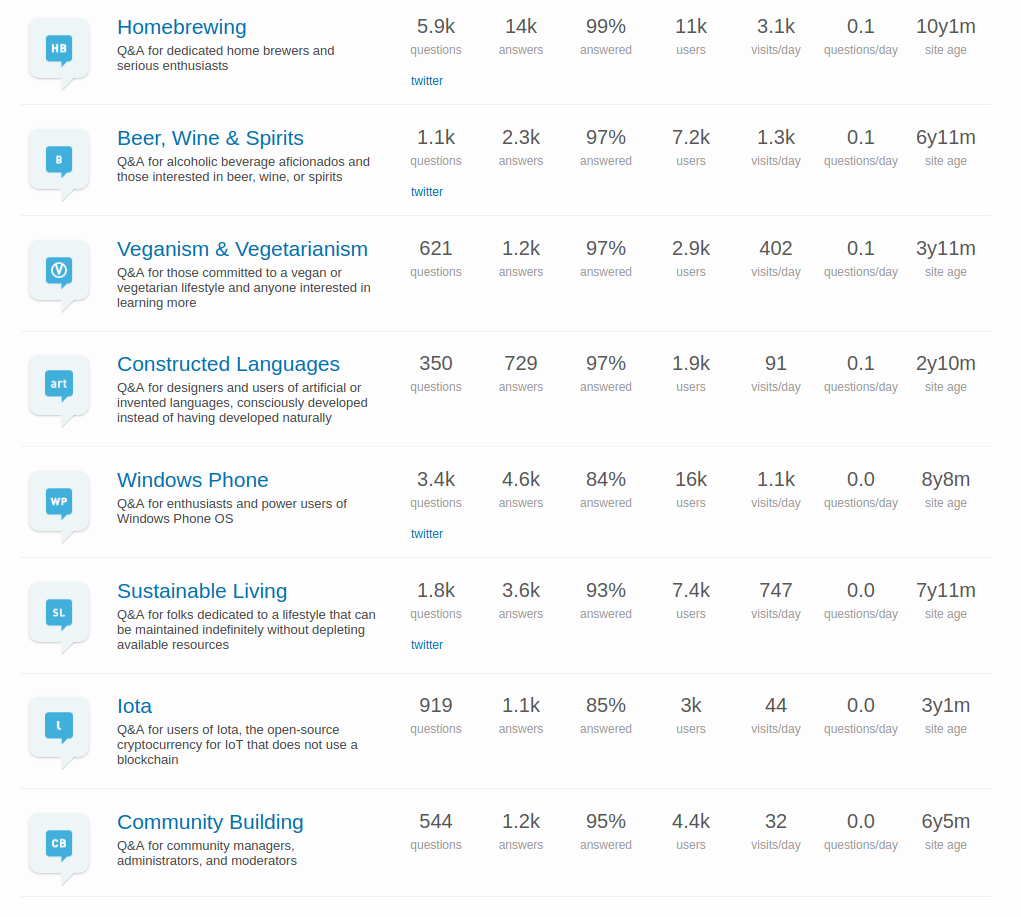 Sure Homebrewing is the oldest of these sites, so will most likely have the largest number of total questions, but in this case it's more than 5x the site in second place (but is not even 2x as old!).

What exactly happened here?
At some point every homebrewing question had already been asked and there was nothing new to ask?
Or the community started feeling discouraged from participating and people left?
Or is it just that in the first few years of Stack Exchange's existence, people were a lot more lenient around the whole network, and as the site's popularity exploded, so did all the problems with that, which led to stricter enforcement of rules or policies which led to fewer questions asked/day?

I can tell you what happened:

Homebrewing forums everywhere have been dying a slow but steady death for many years. We lost MoreBeer forum a few years ago, it's gone, discontinued. The Brewing Network forum (http://www.thebrewingnetwork.com/forum/) has had zero traffic for a couple of years now. The old "Green Board" (http://www.brewboard.com/) as well as the "Blue" / Brews Brothers (https://brews-bros.com/) also have minimal traffic compared with the past. Also Northern Brewer (http://forum.northernbrewer.com/), who alienated most of its members about 5 years ago when they restructured the forum and essentially deleted all posts older than a couple years. Even the AHA forum (https://www.homebrewersassociation.org/forum) sees much less traffic today than just 2-3 years ago. I was a regular on all of these forums for over a decade. The only homebrewing forums with any traffic today, at least in the USA, are HomebrewTalk (https://www.homebrewtalk.com/) and Reddit. HBT in particular is my main hangout these days. Most other forums just don't have enough traffic to bother monitoring anymore.

It just seems to me that Facebook and other social media have become major distractions to MANY aspects of life. I fear social media is ruining my (3 teens') children's lives. They are addicted to their phones and texting and messaging and YouTube and you name it. So this is in part a generational thing. Gen X'ers are fine using forums like this one. But the Millennials and younger generations just will not care about places like this. They see forums like this as something lame, they might call it a "Boomer" thing, and to some extent, they are correct. Forums like these will almost all die out completely eventually. Only a matter of time. And I'm not just talking about homebrewing forums. I'm talking about anything that is not platformed on big social media. People these days want to share pictures of cats and politicians, and memes. They don't want to learn anything. Social media is just too easy an escape from their meaningless lives. I don't mean every person on the planet. I just mean, the vast majority. Every place like this has lost 90-100% of their traffic over the past several years. That's the honest truth.

That's it. That's the theory. Try to prove me wrong. Good luck. Cheers.

I don't think what you're asking can be responded to with a singular, concise answer. However, I'll poke at it a bit because I've seen other homebrewing sites rise and fall.

Well, I'm not sure precisely what you mean. Homebrewing as a hobby seems to get blips of pop-culture which causes people to come in (and shortly exit thereafter) in droves. The definition "Homebrewing" is pretty loose, and it umbrellas competitive homebrewers, to fermented platic bags of sugar-water in someones closet. Also- a big factor is duplicates here simply are not closed. Questions here seem to follow (at least) a 50% duplicate rate. If we closed the duplicates -it would look much like the other sites in your picture.

Or the community started feeling discouraged from participating and people left?

Stack Exchange sites are intrinsically much different from places like reddit because there is some idea of formality to the question/answer format. For instance, most of reddit homebrewing is just pictures of bottles saying "my first batch!" with little meaningful content. That type of content isn't usually the norm for SO/SE sites. Here, things are question->answer. Elsewhere, things are designed for post->react. This means aside from answering simple questions- there isn't much of an interaction hook here (I'm not saying thats a bad thing)

And like other homebrewing (or ANY hobby) communities there's a particular growth point in which the community is 90% new folks asking basic questions, and 10% experts who don't really get any benefit from answering "Is it infected?" posts for the 1000th time, and they eventually wonder off. The experts don't really have much to learn from places like this because we've read the books done the work, there really isn't much continuing value for more experienced brewers aside from the fun of talking to, or helping other brewers.

At some point every homebrewing question had already been asked and there was nothing new to ask?

I'm going to go on a weird limb here and say, yes- every homebrewing question has already been asked. Not here of course- but in across the internet. The science of brewing seems to make interesting strides, but almost no advances have really changed much of how a typical homebrewer makes beer in the last 10 years or so.

From what I can tell, there's been basically little community policing here (not that it's needed typically) and what's you see here is probably very typical to any other specialty hobby community when left mostly alone.

Not the answer you're looking for? Browse other questions tagged discussion .

This site is for discussion about Homebrewing Stack Exchange. You must have an account there to participate.